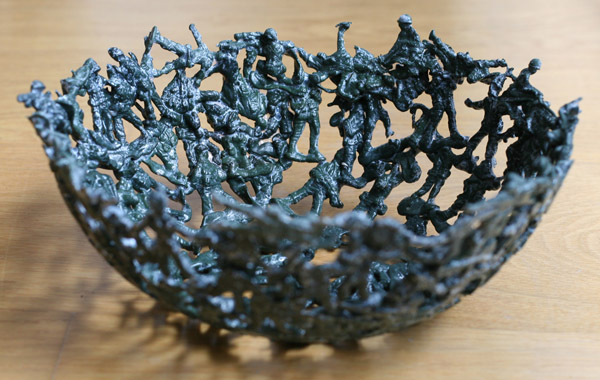 How to make your own Plastic Army Men Fruit Bowl

WARNING: Plastic Army Men are toxic and just like the real things, can kill. So make sure you do this outside on a breezy day.

Step 2 – Lay out the first men

First of all lay two plastic amy men together bases touching each other; this will form the central link. Then arrange the men with bases down so that they have as much solid plastic against plastic.

Build up as many as you can without them tumbling down.

Step 3 – Heat up the layers

Grab the heat gun and start heating around 10-15cm away from the men for around 10 seconds, but do it outside! The fumes are really bad and poisonous so be careful.

The metal bowl can get burning hot so use some oven gloves when rotating the bowl around.

Don’t get too close or they’ll boil, burn and melt like crazy. Use a stick to poke them against the bowl once they start to melt. Very important: make sure each man is melted well into the next.

Repeat the process once the first layer is built up and melted together. Add as many as you can again and melt them firmly against the bowl and to the soldiers below them.

Step 5 – Check men are melted together

Check each man is very well melted to the next. I used laying down men more along the top to finish off the rim of my bowl. During my first attempt several clumps broke off because they weren’t well melted to the next and we held on only by arms and guns which were too thin. So if you have any weak points, grab some more men and melt a few in to patch the holes.

I wanted mine to be a bit stronger, so I mixed some PVA glue and water (2:1) and brushed on two coats. This also acts as varnish and makes them the whole bowl nice and glossy finished.

Can be used to store anything that isn’t too heavy. And you could also melt them into any other shape using glass or metal containers.

Thanks for reading and please post up your bowls when you’ve made yours! I’d love to see them, especially a red Army men version if you can find red soldiers.

Check out this project over at Instructables.com, where it has been featured on the homepage and made an ‘Editor’s Pick’ project.

My long journey to finally going solo in a glider

Tony Robbins UPW 2019 Unleash Your Power Within Trello Board

If you’re interested in talking to me about a project, potential role, a speaking opportunity or booking. it would be great to hear from you.
Contact me

We use cookies on our website to give you the most relevant experience by remembering your preferences and repeat visits. By clicking “Accept”, you consent to the use of ALL the cookies.
Cookie settingsACCEPT
Manage consent

This website uses cookies to improve your experience while you navigate through the website. Out of these, the cookies that are categorized as necessary are stored on your browser as they are essential for the working of basic functionalities of the website. We also use third-party cookies that help us analyze and understand how you use this website. These cookies will be stored in your browser only with your consent. You also have the option to opt-out of these cookies. But opting out of some of these cookies may affect your browsing experience.
Necessary Always Enabled
Necessary cookies are absolutely essential for the website to function properly. This category only includes cookies that ensures basic functionalities and security features of the website. These cookies do not store any personal information.
Non-necessary
Any cookies that may not be particularly necessary for the website to function and is used specifically to collect user personal data via analytics, ads, other embedded contents are termed as non-necessary cookies. It is mandatory to procure user consent prior to running these cookies on your website.
SAVE & ACCEPT